In Britain, our end of year activities usually seem to involve overeating and drinking too much, followed by remorse and denial! What about celebrating the New Year Andean style with a despacho?

A despacho is a ritual performed by the people of the Andes, mainly in Peru. It is created to give thanks as well as to set intentions for the future. In our culture it is common at the beginning of the New Year to reminisce about the year that just finished. We also make plans for the coming year. Our New Year’s Resolutions are normally not formally made. They can often be rather negative in my opinion.

During a despacho, the particular connection to Mother Earth is sought. Thanks is given to all that has been provided. Usually performed as a group ritual, the shaman collects petals and leaves from all participants. He then creates a pattern on a special mat symbolising the intentions for the despacho. More items are added which have significance in relation to nature. These can be animals, plants, the sun, the earth, the moon and the stars. At the end of the ritual the creation is burned. This is so that the intention can cross over to the spirit realm so that it can manifest. 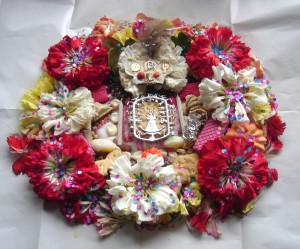 How you can create your own despacho

Could you create your own version of a despacho? Why not? Use a large piece of paper, which you decorate in the centre with anything that symbolises the past year. Include everything that you wish to be thankful for. Then add symbols and pictures to represent what you would like to attract in the year to come. Meditate over your creation to set the intent. Then fold up the paper, safely burn the parcel and send the intention out into the universe. If you prefer you can also bury it in the ground or put it in running water (a river or stream). Use this method only if you have used easily biodegradable materials in your despacho.   Happy 2015 – let’s make it a good one!

If you would like to book in for a session, please fill in your contact details on my consultation page.